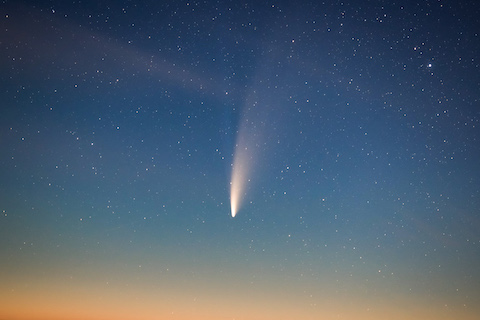 On July 22, the comet NEOWISE, named after the spacecraft that discovered it, will make its nearest approach to Earth. At its closest point, it’ll be about 100 million kilometers away. Mike Murray, Delta College Planetarium manager and astronomer, said the comet can currently be seen shortly after sunset.

“NEOWISE is the best naked-eye comet we’ve seen in seven years,” said Murray, adding that the comet, which was discovered on March 27, is now far along in its orbit to be seen in the night sky.

Murray and Brian Kennedy, show specialist for the Planetarium, produced a video about the comet and how to find it. They offer several tips for anyone wanting to catch a glimpse of the object.

–Start searching for the comet about an hour after sunset, around 10pm in Michigan.

–To spot the comet, look north of where the sun sets on the horizon. On July 22, it will be about 33 degrees above the horizon.

–While the comet can be seen with the naked eye, binoculars or a telescope will provide a clearer view.

Kennedy said the comet, made of rock and icy materials, will visit the solar system again in about 6,600 years.