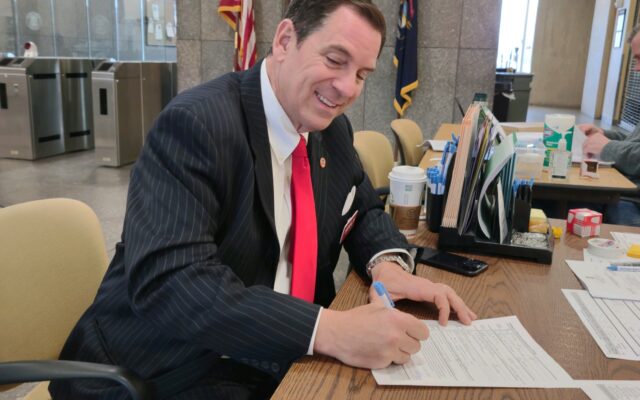 Describing himself as a leader in Michigan’s conservative movement, Republican Matthew Seely of Davison has announced he’s running against Democratic Congressman Dan Kildee to represent the 8th Congressional District. The newly-drawn district covers Saginaw and Genesee counties, plus parts of Bay and Midland counties.

“People are fed up with soaring inflation, crumbling roads, and 45 years of economic downsizing created while Dan Kildee has been in office. He’s done little, except collect federal paychecks and issue plans to further shrink Flint,” said Seely. “We all have learned there’s a better way. We know that America First patriots with real-world experience-– not job-killing bureaucrats—have the common sense needed to bring Michigan back.”

Seely, who’s 58, is a businessman who owns a steel fabrication and manufacturing company. His campaign announcement describes Seely as an America First, pro-life, pro-Second Amendment and pro Trump candidate. It says he’s been involved in a number of high profile efforts challenging state lockdowns during the COVID-19 pandemic, including Operation Gridlock, and Operation Haircut.

“Like many politicians, Kildee has looked at working-class voters for 45 years and said ‘Your jobs are going away and they’re not coming back. Why not become a computer coder?’” said Seely. “Professional politicians like Kildee are fine sending Michigan jobs overseas. When President Donald Trump said enough – and demanded that American politicians put America First—career politicians like Kildee were offended and did nothing to help. However, the people of Michigan saw what was possible and they are starving for change that puts the interests of America and Michigan first again.”

Other Republican candidates in the race are Paul Junge of Brighton and Candice Miller of Burton. The candidate with the most votes in the August 2 primary will run against Kildee in the general election on November 8.