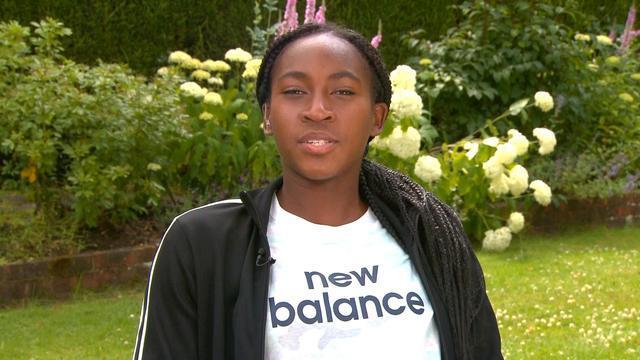 The day before tennis phenom Cori “Coco” Gauff flew to England to compete in the qualifying rounds of Wimbledon, she was doing something far more typical of a 15-year-old: taking an exam.

“It was crazy. Life literally changed in seconds,” Gauff said. “I got the call that I got the wild card, and we literally booked the plane, I believe, that night, left, and went to play [qualifiers].”

The 15-year-old then blew through the qualifying rounds, toppled her idol Venus Williams in the opening round, and became the youngest person since 1991 to reach the tournament’s fourth round. On Monday, her whirlwind run ended when she lost to former world number one Simona Halep.

Gauff said that she “definitely felt pressure” throughout the tournament — but that her strategy for keeping it in check was to remember that “whatever happens, happens.”

“I believe everything happens for a reason,” she added. “So I kinda just, like, said ‘let me just enjoy the moment.’ Because not too many people in the world get to experience this.”

That got a bit harder when she faced off against Williams. “I was just trying to play her like a normal – like I would play somebody else,” Gauff said. “During the match, I kind of did not think about it as ‘oh, I’m playing Venus Williams,’ but as soon as match point was over, I literally was like, ‘I can’t believe that just happened,’ and I still can’t believe it as well.”

She also tried to avoid looking at her parents, Corey and Candi, who could be seen dancing and cheering from the sidelines. “In the match I try not to look at my parents too much, but definitely when I have a big ‘come on’ or I scream, I definitely look at them because they kinda hype me up. And then sometimes when I feel a little bit tight in the match I just look at them because they give me fist pumps, so that just kinda shows me that everything’s gonna be okay. They’re definitely my biggest supporters.”

Now that her Wimbledon run has ended, Gauff says she’ll be returning to her regular life. “Until I graduate college, I guess I’m going to have to take exams during my tournaments,” she said.

A few things have changed, though – including shout-outs from a few of her favorite public figures. “Seeing Ms. Michelle Obama tweet at me, that was crazy,” Gauff said. “She’s definitely been a role model.” She also mentioned Jaden Smith, who she “had the biggest crush [on] when I was younger.”