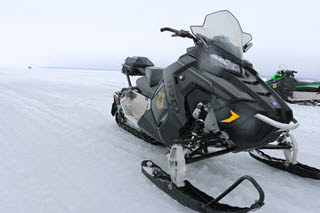 Despite freezing temperatures throughout the state, Michigan Department of Natural Resources conservation officers are urging residents to use extreme caution when on or near the ice, and to know what to do if you or someone you’re with breaks through the ice. Sgt. Jason Becker, who patrols southeast Michigan, reports that six snowmobiles have fallen through the ice in that region over the past 11 days.

“We’re seeing a mix of situations – snowmobilers riding into open water and snowmobilers who break though the ice,” Becker said. “Be aware of the ice conditions before you go out. Do not rely on yesterday’s conditions. Weather changes can rapidly affect the ice in a short amount of time, even if it’s a sudden drop in the temperature.”

On Jan. 22, Upper Peninsula conservation officers near Garden responded to reports of a drowning after strong winds created a 4- to 5-foot-wide pressure crack, exposing a portion of Lake Michigan.

Officers said an angler had been operating his off-road vehicle to or from his ice shanty, which was located on the far side of the ice that had been separated by the pressure crack. It appeared the man mistakenly navigated his ORV into the open water, where it then sank 10 to 15 feet.

Locate places to snowmobile and read more about snowmobile safety at Michigan.gov/RideRight.