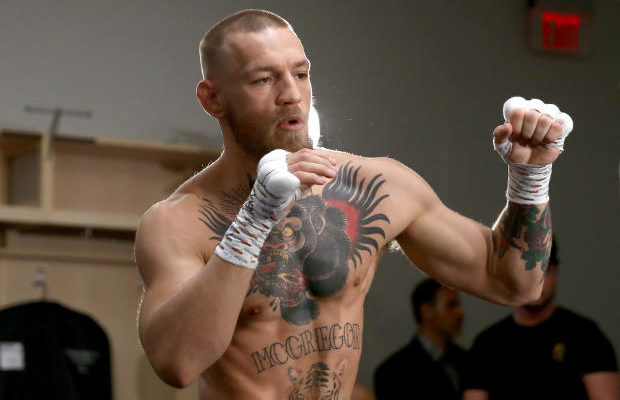 Conor McGregor was recorded on video apparently sucker punching an older man inside a Dublin bar earlier this year. The attack took place as the retired MMA fighter was enjoying shots of whisky with other patrons.

On Thursday, TMZ posted surveillance footage taken from inside The Marble Arch Pub, where McGregor was looking to buy a round of his Proper Twelve whisky for people in the middle of the day. One of the men inside declined, putting the glasses back on the counter twice and seemingly irking the one-time boxer.

The April 6 video shows McGregor downing a shot with three other patrons before taking a swing at the man who wasn’t expecting it. Despite that, the man appeared unfazed after the attack and McGregor was quickly dragged away.

A spokesperson for An Garda Síochána, Ireland’s police service, told CBS News that they would not comment on McGregor specifically, but they’re investigating an assault at the bar that happened around the time matching TMZ’s video.

“Investigations ongoing in relation to this incident and no arrests have been made to date,” the spokesperson said.

The controversial fighter announced in March that he is retiring from mixed martial arts. Earlier that month, he was arrested for allegedly smashing a fan’s phone in Miami Beach.

McGregor returned to UFC last fall after a hiatus during which he made his boxing debut, a loss to Floyd Mayweather in the richest fight in boxing history.

He was suspended from UFC for six months and fined $50,000 for a brawl after his loss to Khabib Nurmagomedov in October. McGregor said he regretted getting into the backstage melee.