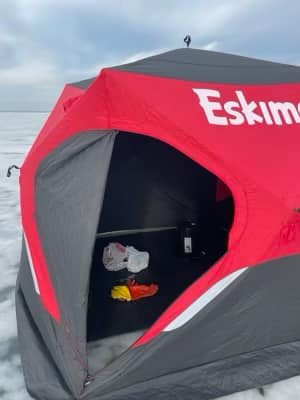 The Coast Guard is looking for answers concerning an empty ice shanty in Saginaw Bay.

The red and black shanty was spotted on an ice floe in the bay Wednesday afternoon, roughly 1,000 yards off the Quanicassee Wildlife Area in Hamton Township.

It’s unknown if the shanty was occupied when the ice floe broke off. No one was found in or nearby the shanty, but crews did find adult and child-sized gloves and a bag of food inside.

Helicopter and air boat searches were suspended after they failed to find anyone in the water. According to the Coast Guard, the Department of Natural Resources received secondhand knowledge of the possible occupants, though nothing has been confirmed. Anyone with information is asked to call the Coast Guard Command Center at (313) 568-9560.