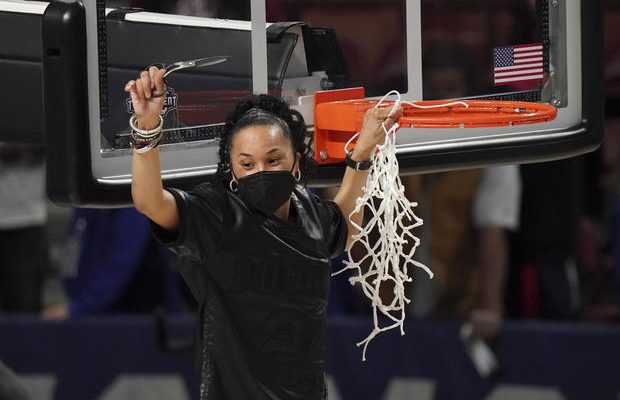 When Dawn Staley was growing up, the WNBA didn’t exist. The game has changed since her younger years, the former player and current head coach of South Carolina’s women’s basketball team said, because young women will have today’s stars to look up to.

“I often question whether or not if I can play today in how the game is evolved. These super physical, super talented individuals. But most of all, what I think has happened is for all of my current players, for all of their lives, they’ve only known the WNBA,” she told CBSN contributor Antjuan Seawright in an interview.

“If you’ve grown up with professional women’s basketball your entire life, you have a tangible thing in front of you to work hard towards,” she said. “It was probably a bit harder when I was growing up playing this game because you look forward to college and then if you get lucky enough to play in the Olympic Games because that was like professional basketball to us.”

After playing four years at the University of Virginia, the Charlotte Sting drafted Staley with the ninth overall pick in the 1999 WNBA draft — three years after the league was formed. The three-time Olympic gold medalist has since been inducted into the Naismith Memorial Basketball Hall of Fame.

Staley now spends her days coaching the Gamecocks and led them to a National Championship in 2017. This year, her team is the No. 1 seed in their region in the NCAA Women’s Basketball Tournament.

She sees herself as being at her best in times of adversity.

Staley compared the WNBA’s influence to the election of Kamala Harris as vice president, saying they have shown women, especially Black women, they can aim higher in their aspirations.

“If all the players I’ve coached, if they’ve only always seen the WNBA in their lives, if they’ve only known the WNBA to exist, they have something to reach for. Now that Kamala Harris is our vice president, you know, some political science major, Black students, if they want to stay in that field, they have something to reach for,” Staley said. “Representation matters. It does.”

She doesn’t take her success for granted, using her platform to advocate for racial equality and pressing for more diversity at the University of South Carolina. Last summer, Staley was named to the Southeastern Conference’s Council on Racial Equity and Social Justice, a group that will help outline strategies to promote racial justice and equality across collegiate athletics.

“I know a lot of people have been hurting for years and those people don’t have a platform. Those people don’t have a voice,” she said. “I feel I have to be a beacon of hope and a voice for those who are unable to share their experiences because I consider myself a leader. I consider myself a mentor for young people including the players that I coach and I have to help them navigate through this real-world life because it’s a lot different.”