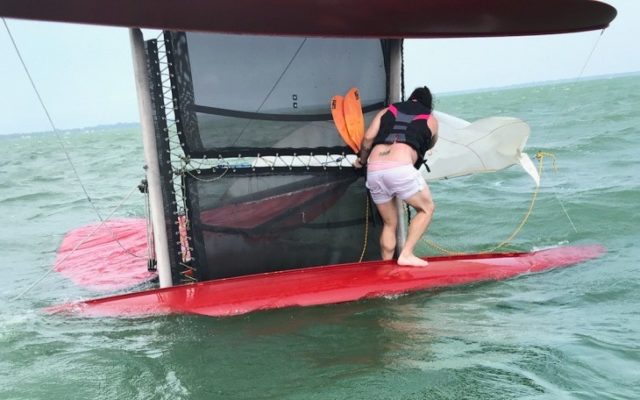 On Tuesday, July 20 around 3:00 p.m., Huron Central Dispatch received calls from different on-shore bystanders about a catamaran being flipped over in the water, with an approaching severe thunderstorm.

The catamaran was about 250 yards south of the western end of Sand Point, in Caseville Township.  Deputies responded to the scene with a trailered airboat, as well as the Caseville Fire Department and their trailered Zodiac rescue boat.  Two occupants with life jackets on were observed in the water attempting to right the catamaran. As the storm passed with strong sustained  winds, it wasn’t long before the capsized catamaran and victims were over a mile offshore. By 3:45 and around a mile from North Island in Wild Fowl Bay, both victims were safely taken aboard the Sheriff’s Department airboat and brought back to shore in the rough, choppy water after the storm.

Once on shore the victims from Farmington Hills, a 38-year-old man and a 15-year-old girl, refused medical treatment. The catamaran was left adrift and will be picked up by a salvage company.

Also assisting with a standby rescue boat was the Port Austin Fire Department.