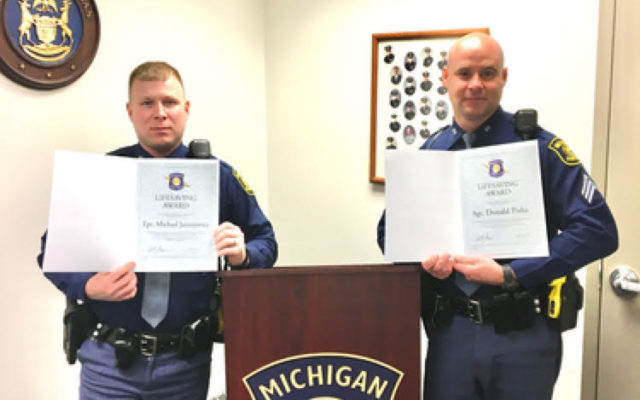 A State Trooper and Sergeant from the Caro State Police Post have received a Live-Saving award for saving a 67-year-old woman from choking on June 10, 2020.

Trooper Michael Jarosiewicz and Sergeant Michael Pisha were dispatched to an address on Dixon Rd, outside of Caro, for a 67-year-old woman choking. When they arrived, the woman was on the floor of the kitchen, had shallow breathing and was very pale. Trooper Jarosiewicz began giving back blows which were ineffective. The victim then went unconscious and quit breathing. Sergeant Pisha then delivered 4-5 abdominal thrusts and was able to dislodge a large piece of food. At this point the victim started breathing on her own and regained consciousness.

Jarosiewicz and Pisha monitored the victim’s condition until an ambulance arrived and took the woman to a local hospital. This is Sgt. Pisha’s second Life-Saving award and the first for Tpr. Jarosiewicz.