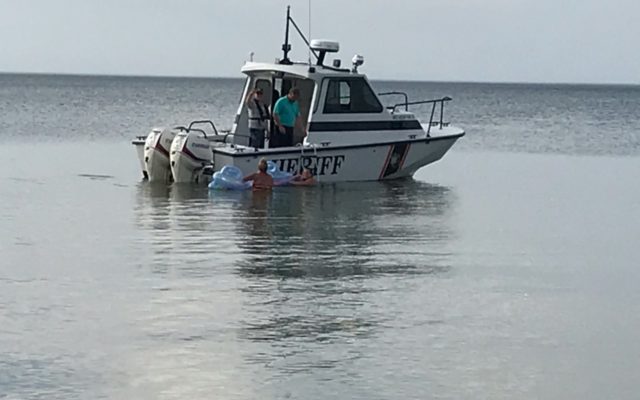 About 11:45 Saturday morning, Huron Central Dispatch received a 911 call about an individual in a canoe about a mile off shore of Wagener Park possibly being in distress. A good Samaritan on shore had been watching this individual as the winds continued to increase from the west and believed the the person was in trouble. Huron County Sheriff Department sent their 30 foot boat from Port Austin while Harbor Beach Firemen  launched their rescue Zodiac boat and headed toward the area where the canoeist  was now nearly 2 miles offshore. The canoeist was eventually brought aboard the rescue boat and he and his canoe were brought back to shore unharmed.

Fortunately this incident had a good ending. Sheriff Kelly Hanson said Huron County has become a popular destination for paddle sports which when taking the lake for granted can be deadly. The 36 year old canoeist from Caro is very fortunate that someone on shore had taken note of him because he had no way to call for help being he had no cellular phone. Winds coming off shore can make the water look favorable for paddle sports, when in fact it doesn’t take long not far off shore before the wind strength increases to the point that you’ll be over come.

Hanson said enthusiasts are warned to always have a life jacket, a cellular phone, preferably in a watertight bag and let people know what your intentions for your trip are. Hanson concluded saying  Lake Huron can be very unforgiving.