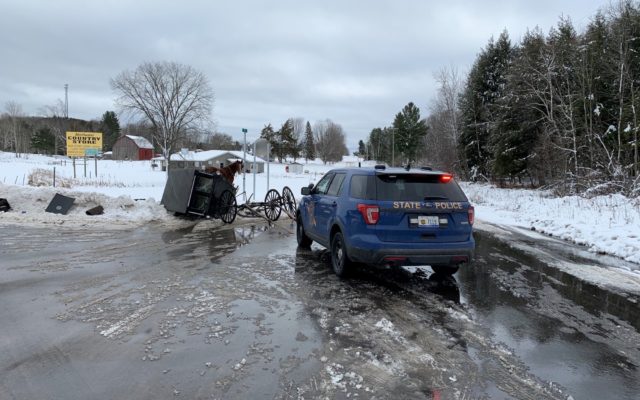 On Tuesday, December 22nd,  at approximately 2:19 P.M., troopers from
the Michigan State Police (MSP) Cadillac and Mt. Pleasant Posts were dispatched to the area of M-115 at
70 th Road for a crash involving a horse drawn buggy and a Chevrolet Tahoe.  Further investigation revealed
the Tahoe was traveling east on M-115 and the horse and buggy were stopped at the stop sign on 70 th .
Rd., facing south. The driver of the buggy lost control of the horse and pulled into the path of the Tahoe,
colliding with the vehicle.
The horse drawn buggy was driven by a 33-year-old Marion woman and three children. Minor injuries
only were reported by the occupants of the buggy and further medical treatment was refused. The driver
of the Chevrolet Tahoe, a 73-year-old Marion woman received no injuries. The horse, a 12-year-old male
named “Lasso” received only minor injuries and walked away from the scene.