Breonna Taylor's boyfriend says they “had baby names and everything” 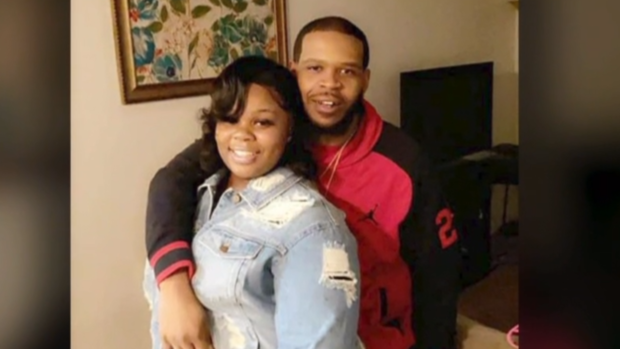 ▶ Watch Video: Breonna Taylor’s boyfriend Kenneth Walker, his parents speak on the joy she brought to their lives

In a “CBS This Morning” exclusive interview, Breonna Taylor’s boyfriend, Kenneth Walker III, told Gayle King about his struggles with the emotional trauma of her death. Walker was with Taylor the night she was killed by Louisville police officers during a narcotics raid in March.

Police were investigating another man. Neither Walker nor Taylor had a criminal history, and no illegal drugs were found in the home.

“She was funny like me. And I could see from Twitter, she played a lot just like me, always joking, always laughing,” Walker said about Taylor. “We was friends for a long time before it ever evolved into anything else. So I think that’s how I knew she was the one. We was too good at being friends. But it ended up working out. And finally we was getting it together, right?”

“Getting it together like you thought, ‘I could marry you,’ get it together?” King asked.

“For sure. That was definitely in the talks,” Walker said. “Definitely had baby names and everything.”

Walker said one of the baby names they had thought of was Kenbre, which King noted was Kenneth and Breonna combined.

Taylor and Walker were collecting their favorite items for the family they hoped to build, Walker said. Like a pair of mini Air Jordans for the baby they wanted together.

“Looking at these baby shoes. What do they mean?” King asked Walker.

“To me it means it’s something that’s never gonna happen,” Walker said.

Walker’s parents, Velicia and Kenneth Walker Jr., have been supporting their son through his grief and want justice for Breonna Taylor, the woman who would have been their daughter-in-law.

“I say it all the time. You know, as a mom, you know, you want the best mate for your children,” Velicia Walker said. “And she just completed us. She completed the family.”

On the night of the police raid, Kenneth says in his fear and panic he called his mother for help before calling 911.

Velicia Walker rushed to the scene and recordings released by Louisville police show that she spoke to officers about what her son told her that night.

“He couldn’t tell you what had happened, could he?” King asked.

“He didn’t know,” Velicia Walker said. “I didn’t hear anything at first in the background. I just heard him screaming and crying.”

“What’s your biggest concern as we sit here today, about Kenneth?” King asked.

“It’s hard,” Velicia Walker said. “I’m Mama. I can see things about him that he doesn’t even realize. You know, whereas when they were little kids, if he had a bump on his head I could kiss it, I could blow it. But I can’t fix this.”

“I’ve only listened to that 911 call once or twice. And it took me months to listen to it. And the thing is, his whole life, I’ve always been there to help him, or to be there for him. And I couldn’t help him,” said Walker’s dad, Kenneth Walker Jr.

Both the Walker parents said they felt like they couldn’t help their son because he was considered a suspect from the beginning.

“And, I mean, think about it. Reality is, he’s still a suspect in their mind,” Velicia Walker said. “He’s still their scapegoat.”

In the chaos that followed the death of Breonna Taylor on March 13, Walker was indicted for the attempted murder of a police officer. In May, the charges were dropped without prejudice which means the case can be refiled in the future.

For Kenneth and his family, it’s a stark possibility that they never could have imagined.

“You know, the simple lessons that we teach them, that we hold true as parents. The lessons that we try to, you know, ‘ain’t nothing good for you going on at the street. Stay at home,'” Velicia Walker said. “Here you are, this one time, you at home. And you get in the worst trouble you’ve ever been?”

“At home,” both the Walker parents emphasized.

“And you did nothing wrong. But do what you were taught to do,” Velicia Walker said. “Be a man. Protect your family. Tell the truth.”

“It’s like March 13th every day, pretty much. I never got to say bye. So that makes a big deal. It makes a big difference,” Kenneth Walker III told King.

“It’s usually how it goes when you’re Black and deal with police,” Walker said. “That’s all I think of that. I don’t necessarily even see this as a Black/White issue. It became that after they figured it out. But this is a right and wrong issue. It don’t matter if you was blue, pink, purple, you know, White, Black. It doesn’t really matter. It could’ve been elderly people in there. It could’ve been kids. It could’ve been anything. So they were just wrong all the way around the board no matter who was in there. But it definitely turned into a Black and White thing when I walked out.”

“Yeah, we should say that neither you or Breonna Taylor had a criminal history of violence or drugs,” King said.

“I guess that doesn’t matter to them, you know,” Walker said. “People like to skip over that part.”

“Where do you go from here? I mean, I look at you and I just see so much pain, and rightfully so. Do you have friends who are helping you out?” King asked.

“I actually do have a therapist,” Walker said. “I probably need to — I’ll be talking to him a lot more. But yeah, I really don’t agree with that, but you gotta try everything to try to be okay.”

“It just means she’s getting the respect that she deserves. You know, that’s the least that can happen,” Walker said.

“What does justice look like for you, for Breonna Taylor?” King asked.

“Breonna Taylor sitting right here next to me,” Walker said. “That’s the only justice for me.”

None of the officers involved were charged for Breonna Taylor’s death.

Both the Louisville Metro Police Department and attorneys for three individual officers involved declined “CBS This Morning’s” requests for interview or comment.

More of King’s exclusive interview with Walker and his attorneys airs Thursday on “CBS This Morning” at 7 a.m. on CBS.