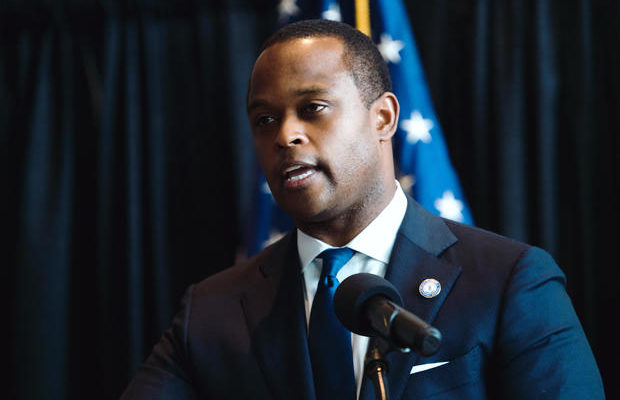 An anonymous grand juror in the Breonna Taylor case on Tuesday took issue with Kentucky Attorney General Daniel Cameron’s public characterization of the panel’s proceedings last month. The juror’s statement, which was released through a lawyer, came after a judge denied Cameron’s motion seeking secrecy in the case, following the grand juror’s rare petition to speak publicly.

Cameron presented evidence to the panel that in September indicted former Louisville officer Brett Hankison on three counts of wanton endangerment in the March police raid that left Taylor dead. Hankison, who fired bullets into Taylor’s apartment from outside, was indicted for endangering Taylor’s neighbors when bullets flew into their unit, but no one was charged directly in Taylor’s death.

In a September 23 news conference, Cameron said his investigation found — “and the grand jury agreed” — that the two officers who opened fire from Taylor’s doorway, killing her, were justified because they were returning a shot fired by her boyfriend. Because of that, Cameron said, six possible homicide charges under Kentucky law were not applicable to the case.

But “the grand jury didn’t agree that certain actions were justified, nor did it decide the indictment should be the only charges in the Breonna Taylor case,” the grand juror said in the statement Tuesday.

In the juror’s petition last month asking a judge to speak publicly about the case, they accused Cameron of “using the grand jurors as a shield to deflect accountability and responsibility for these decisions.” In the statement Tuesday, the juror said “my duty as a citizen compelled action” to speak out after hearing Cameron’s press conference.

Civil rights attorney Ben Crump, who is representing Taylor’s family, said Cameron “whitewashed” what he presented to the grand jury.

“We now know what we suspected: Attorney General Daniel Cameron took the decision out of the grand jury’s hands,” Crump said. “They didn’t allow the grand jury to do what the law says they have the right to do. This failure rests squarely on the shoulders of Daniel Cameron.”

Though grand jury proceedings are typically secret, Judge Annie O’Connell wrote in a ruling Tuesday that “the traditional justifications for secrecy in this matter are no longer relevant and the ends of justice require disclosure.” She noted that 15 hours of grand jury recordings have already been made public in the case, and said Cameron’s concern that further disclosures could impair a fair trial for Hankison is not “founded in reality.” However, she ordered the juror to re-file their motion to speak publicly because she ruled it was improperly filed.

Cameron said Tuesday he remains confident in his office’s grand jury presentation, and that while he disagrees with the judge’s ruling, would not appeal it. Cameron has said did not present murder charges because his investigation determined the wanton endangerment charges against Hankison were the only ones that would hold up in court.

“As Special Prosecutor, it was my decision to ask for an indictment that could be proven under Kentucky law,” Cameron said in a statement. “Indictments obtained in the absence of sufficient proof under the law do not stand up and are not fundamentally fair to anyone.”

But Cameron has also previously suggested that the grand jurors could have asked about more stringent charges if they disagreed.

“I suppose… you know, again, the grand jury had two and a half days to ask questions, you know I suppose if they wanted to push… they’re an independent body,” Cameron said in an interview with local station WDRB, “If they wanted to make an assessment about different charges they could have done that.”

But in the statement Tuesday, the juror said, “questions were asked about additional charges and the grand jury was told there would be none because the prosecutors didn’t feel they could make them stick.”

The juror said they were not “given the opportunity” to deliberate on additional charges and “deliberated only on what was presented to them.”

In a previous interview with CBS News, University of Kentucky College of Law professor Cortney Lollar said it would be rare for grand jurors to have the legal knowledge to suggest charges outside of a prosecutor’s recommendation.

“Most grand jurors are not lawyers, they aren’t experts with the legal process,” Lollar said. “They’re going to take a look at the evidence and the law presented to them and decide whether there’s enough to charge based on what’s presented to them.”

The juror said they could not speak for others on the panel but said, “I can help the truth be told.”

A second anonymous grand juror, who has also asked to speak publicly in the case, said in a statement they were pleased with the judge’s ruling and that they are discussing next steps. The jurors’ lawyer, Kevin Glogower, said the two jurors are not speaking out publicly at this time beyond their statements but are seeking transparency in the case.

Taylor’s boyfriend, Kenneth Walker, recently told CBS News that no one announced themselves as police and that he fired his gun fearing someone was trying to break in.

“That’s why I grabbed the gun. Didn’t have a clue,” Walker said. “I mean, if it was the police at the door, and they just said, ‘We’re the police,’ me or Breonna didn’t have a reason at all not to open the door to see what they wanted.”

The police search warrant was related to a drug investigation into Taylor’s ex-boyfriend, who did not live at the home, and no drugs or money were found.