Brenda Vaccaro is having a good time 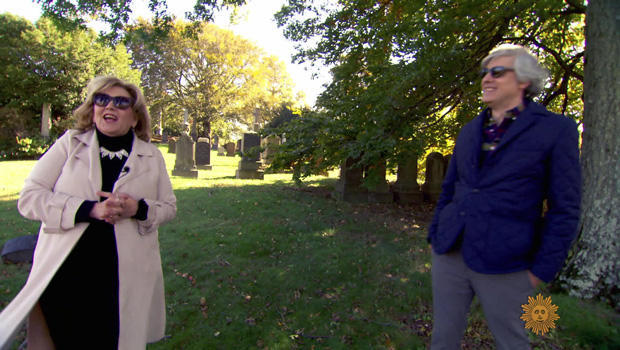 ▶ Watch Video: Brenda Vaccaro is having a good time

It’s a brisk fall day, perfect for strolling through Brooklyn’s historic Green-Wood Cemetery with Vaccaro, who told correspondent Mo Rocca, “I’ve never seen such a collection of beautiful, beautiful trees.  … Oh, Mo, we gotta touch this. Look at this. Ohmygod, isn’t it magnificent?”

“Just the structure alone is probably a million dollars,” he replied.

“I brought a lot of money just to buy a plot. I’m honored to be here!”

“I was a teenager for ‘Midnight Cowboy’!”

“Midnight Cowboy” was a sensation when it opened in 1969, the first (and only) X-rated movie to win a Best Picture Oscar, and it helped make Brenda Vaccaro a star.

Over her long career she’s played the wife of a missing astronaut, in “Capricorn One”; the mother of one of TV’s “Friends”; and the sister of Al Pacino’s Dr. Jack Kevorkian, in “You Don’t Know Jack.”

But while this daughter of Italian immigrants was born in Brooklyn, she was raised in Dallas, Texas, where her parents opened an Italian restaurant.

Rocca asked, “In high school, you were the girl who … what?”

“Made trouble, but got a laugh,” she replied. “A lotta schools I went to, my father got a call saying, ‘You know, Mr. Vaccaro, we think you could find a better place for Brenda that’s better suited for her needs’!”

“Very polite way of putting it!”

“My father would – ‘Not again!’ Poor Dad, he really needed a son that was going to go to MIT, you know what I mean? He needed Harvard.”

But she knew where she belonged. At seventeen, she headed back to New York to study at the famed Neighborhood Playhouse Acting School. Vaccaro made her Broadway debut in 1961, and over the course of that decade would be nominated for three Tony Awards…

Here is Vaccaro singing “He’s here,” in the musical “How Now, Dow Jones.”

Then came “Midnight Cowboy,” with Dustin Hoffman as a con man who befriends a hustler played by Jon Voight. Vaccaro is the socialite who pays $20 for Voight’s services, but they mostly end up playing Scribbage. Her scene with Voight’s character, Joe Buck, called for her to be buck naked. Vaccaro’s mother was none too pleased: “‘I can’t believe I’m seeing your breasts before I’m gonna see your face in your first movie,’ my mother would say. ‘No, you won’t, Mom. Honestly.’ And you know, I went to Ann Roth and I pleaded with her.”

The movie’s costume designer, the legendary Ann Roth, had Vaccaro covered, as she told “Sunday Morning”‘s Rita Braver back in 2014: “I bought this red fox coat for two hundred bucks,” Roth said. “And I told Brenda not to worry, that she wouldn’t have to lie there naked.

“How could you not fall in love with a naked girl in a fur coat?”

“I thought it was fabulous,” Vaccaro said. “And Jon had no clothes on. Well, maybe he had something, over something.”

Vaccaro found true love when she starred opposite a young Michael Douglas in the movie “Summertree.” “He was a handsome colt, young colt. He was really beautiful. We just went bingo! We liked each other very much.”

She and Douglas lived together for almost seven years. “I used to call him my hippie-dippie, ’cause his hair was here. He’d been in a commune in Santa Barbara,” she said.

They even had a kind of commitment ceremony – what she called a hippie wedding – in her agent’s backyard. “Very simple. I don’t think there were any rings or anything.”

Rocca asked, “And was there food?”

“There’s no such thing as hippie food, is there?” she replied. “I think it’s just a good joint, to tell the truth. Like, nicely rolled joint. I mean, that was one thing I learned. He taught me how to roll joints that were fabulously-rolled. Man, the ends were tipped! I just remember I was in love with him. I loved him. He was wonderful.”

“Why didn’t you and Michael get married?”

“Because at that time it wasn’t the thing to do. You know, that was the whole hippie kind of existence, you know?” she replied.

In 1976, Vaccaro scored an Oscar nomination for “Jacqueline Susann’s Once Is Not Enough,” and in 1980, an especially breathy Vaccaro played herself in a commercial for Playtex tampons, at a time when feminine hygiene products were rarely advertised on television.

Comedian Andrea Martin parodied the ad – and Vaccaro’s breathing – on the sketch show “SCTV.” “I thought she was brilliant!” Vaccaro laughed.

At 81, Brenda Vaccaro is single, separated from her last husband. She’s still acting during the pandemic in a series of plays premiering on Zoom.

And she’s reflecting on the passage of time: “I feel as life changes and you get older there are two things you really have to accept: One is loss, and the other is changes. I mean, you lose a dog, you lose a mother, you lose things. It’s a loss. And the same with changes. All of a sudden, your arm is killing you, you know, arthritis, or you need a hip replacement. And these things have to be accepted with grace.”

But don’t expect Vaccaro to be taking up residence in Green-Wood Cemetery any time soon.

“I haven’t thought about these things in years; I don’t even know how I can go back this far,” she laughed. “I’m having such a good time. Go ahead. I need a drink. No, I don’t. It would be fun. This is water. But anyway, that’s it, baby! That’s it!”