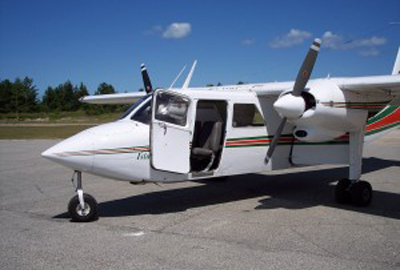 The victims of a deadly plane crash on Michigan’s Beaver Island include a real estate
agent and a couple who were planning to open a winery and vineyard there. The plane
crashed Saturday afternoon on Beaver Island in Lake Michigan west of Mackinaw City, killing four of five people on board.
Lt. William Church of the Charlevoix County Sheriff’s Office has identified three of the
deceased as Kate Leese and Adam Kendall of Beaver Island and Mike Perdue, a
Gaylord real estate agent. He says Perdue’s 11-year-old daughter was injured in the
crash. Leese and and Kendall had moved to Beaver Island to open a winery.
Authorities haven’t identified the pilot, who was also killed.  Two dogs aboard the plane also died. The Perdue girl was treated at a northern Michigan hospital before being transferred to a Grand Rapids Medical Center for treatment of multiple fractures suffered in the crash.  Federal investigators will work to pinpoint the crash of the Islander similar to the plane shown above.