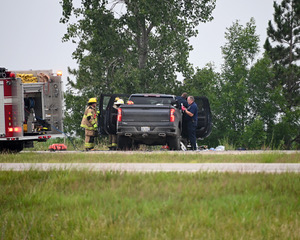 A woman from West Branch is dead after a crash Tuesday morning on I-75 near Linwood. Bay County Sheriff Troy Cunningham said two Chevrolet Silverado trucks were involved.

Sheriff Cunningham said just after 8:00 a.m., a 56-year-old man from Harrison was driving north on I-75 with his 9-year-old grandson when he had a medical emergency and ran off the road, crossing the median and hitting the second truck, which was southbound with a husband and wife inside.

The wife, who was a passenger, was pronounced dead at the scene. She was identified as 78-year-old Beverly Shufflin. Her 78-year-old husband and the other driver and passenger were all taken to Covenant HealthCare in Saginaw with non life-threatening injuries.

That section of I-75 had to be shut down for more than two hours after the crash.