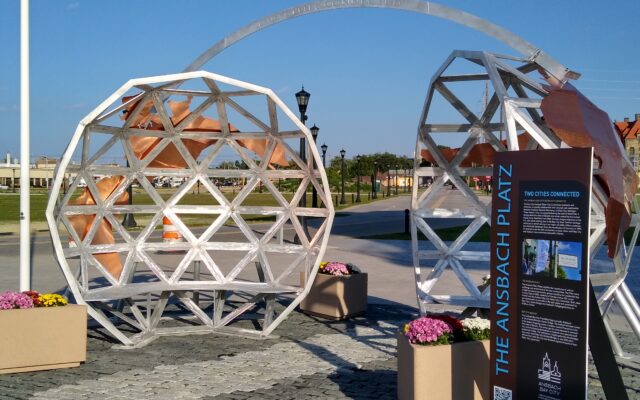 A delegation from Bay City’s sister city of Ansbach, Germany visited this past weekend to celebrate more than 60 years of partnership after delaying plans in 2021 due to the Covid-19 Pandemic. The group included city council members, Ansbach’s head of tourism, as well as teachers and students.

This visit reciprocated a trip to Ansbach that Bay City leadership took earlier this Summer, during which a pedestrian bridge in the German city was renamed “Bay City Bridge.” While the delegation was stateside, they were present for the dedication of Ansbach Platz on Bay City’s riverfront, as well as the unveiling of a sculpture entitled “Two Cities Connect.” The statue depicts two halves of a globe connected by a bridge from Bay City to Ansbach. It was created in collaboration with students from the Bay City area in honor of the long-standing partnership between the two sister cities.

On Sunday representatives from the two cities met to discuss future plans, and signed official documents in recognition of the more than 60 years of friendship. According to Bay City Manager Dana Muskott, both cities desire to bring this partnership beyond their respective governments and extend it into their communities.