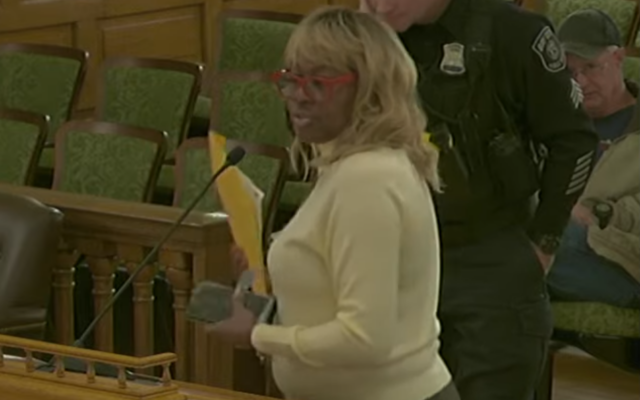 A back and forth between a public speaker and Bay City’s Mayor brought some fireworks to this week’s commission gathering.

Commission Vice President Kristen Rivet (elected earlier in the meeting alongside Commission President Chris Girard) had to call for a ceasefire as Mayor Kathleen Newsham called on security to remove public speaker Andrea Burney for accusing City Manager Dana Muscott and the other commissioners of shady dealings.

Burney, who was one of six previously interviewed for the 3rd ward commissioner seat (filled later in the meeting by Trey Pinkstock), took to the public podium to question procedural wire-transfers of city money, claimed the city was changing rules to become Redevelopment-Ready certified through the Michigan Economic Development Corporation, and questioned a sale of vacant public property- claiming the public was never told the property was for sale.

Mayor Newsham responded to Mrs. Burney, something not normally done during public comments, in hopes of clearing up her questions; affirming the city has never bent rules or made hidden expenditures.

When asked on the matter after the meeting;  Mayor Newsham said, prior to Burney’s interview or the altercation, she had never once seen or heard from Mrs. Burney at any commission meeting, or heard accusations against the commission on similar routine matters.