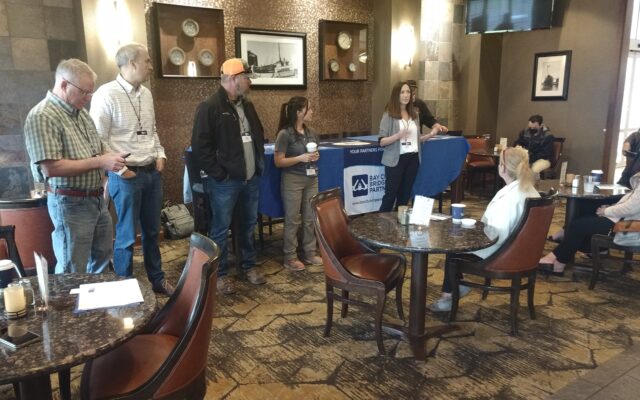 Bay City’s Liberty Bridge is on track to finish on time and on budget despite some setbacks in its construction.

Bay City Bridge Partners (BCBP) representatives held an informational coffee chat with community members Thursday, May 19 at Bay City’s Doubletree Hotel Riverfront Grille with a progress update on the bridge. In February, BCBP closed the bridge to traffic after a large pothole opened up, delaying the opening of the southbound lanes. Supply chain issues have also plagued construction like it has in so many other sectors of society.

However, BCBP General Manager of Operation Lynn Pavlawk says things are progressing as they should.

“We’re not isolated from the current economic challenges that any business is seeing at this point in time, whether it’s raw materials or resources. But we have an amazing team and we’re doing a fabulous job of idnetifying those and overcoming them quickly. It is allowing us to maintain our original timeline, as far as opens to tolling, as well as allowing us to maintain our orginal budget for this particular project.”

The bridge’s southbound lanes are expected to be open to traffic in August. Work has also begun on the northbound side, with about 51% of the bridge demolished.

BCBP Construction Resident Engineer Louis Taylor says there will be major upgrades to the technology operating the bridge.

“The mechanical components have all been more precise and a lot smaller. Things aren’t taking up the same amount of space. And of course, everythng is of the digital age, so things that may have been mechanical may be digital now.”

Taylor says the bridge’s machining is able to achieve tolerances much more easily than when the bridge was originally built 50 years ago.

Pavlawk also says an important portion of BCBP’s parent company, United Bridge Partner’s mission is to ensure there is as much local involvment in its construction as possible. According to Project Manager for Granite-Kraemer Joint Venture Kevin Kruger, a crew of about 60 people are involved in the bridge’s reconstruction with the majority of them drawn from surrounding communities and unions. BCBP is also working with several local subcontractors.

Pavlawk herself, currently residing in Munger, is a Bay City native, as is Taylor. Kruger is from Midland.