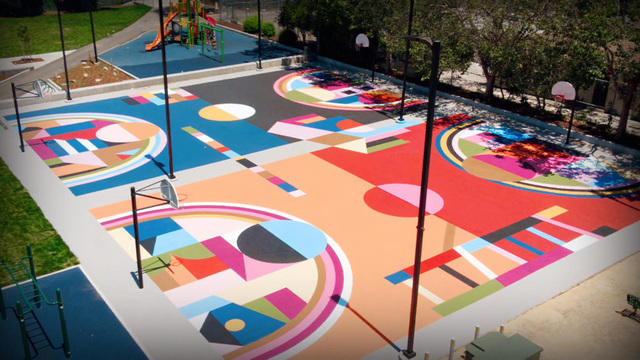 Basketball courts are often a gathering place in urban communities, but many are in bad shape. That inspired one hoop-loving guy to start a nonprofit that changes blacktops from drab to fab.

At the Rainbow Recreation Center in Oakland, the basketball court has become a giant canvas.

“When I see a park in disrepair, it just makes me want to bring that space back to life,” Dan Peterson told Jamie Yuccas for “CBS This Morning.” Peterson is the visionary behind this vibrant transformation.

His love of basketball began as a teen, but in 2015, Peterson found himself on a badly neglected court and was inspired to repaint the free-throw line.

He realized that instead of bringing people together, cracked, crumbling courts in urban neighborhoods are often seen as barriers that drive families away. So Peterson launched “Project Backboard” and reshaped 22 courts across the country into magical murals.

Each is one-of-a-kind, offering hope for a brighter future.

“Playing on courts that look like this may cause you to think more creatively,” Peterson said. “That is one of the hopes, is that people come into this space and they start imagining ‘what if?'”

Local artist Muzae Sesay was inspired to design the Oakland court. He said his abstract images represent home and a sense of community.

“It’s important, I think, to have this space they can take pride in, feel comfortable and safe there,” Sesay said.

An Oakland resident, Sesay knows these children worry about the violence on their streets. So having this beautiful place to play makes a powerful statement.

“It’s so impactful, when you show these kids that they matter,” Sesay said.

“It’s amazing, the way it came out,” 14-year-old Halima Hopkins said of the new court. “I was just, like, watching them from the swings. Like that’s all I did for like two days straight. I wanted to join in and help.”

To make it all possible, “Project Backboard” teams with sponsors like video game maker NBA2K. The cost is around $50,000.

“Being out there and physically playing the game is so important to kind of develop those skills that you need in life,” Ronnie Singh, digital marketing director for 2K, said. “You need to know how to cooperate with a team, be a leader. That’s why we build these courts and why it’s so important to us.”

The importance of play and teamwork seems to be a slam dunk at the Rainbow Recreation Center.

“I used to be mean before I came here,” Hopkins said. “I didn’t really want to be a role model, but now, like, I’m nice to everyone. Everyone knows my name. They’ll call me when they need help or something.”

A colorful change giving a win to the community.