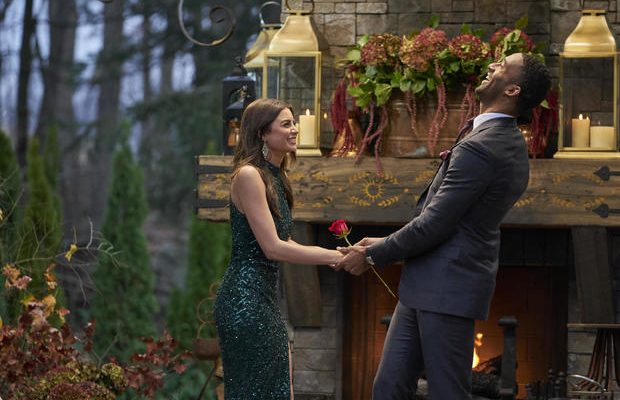 Matt James is ending his season of “The Bachelor” as a single man.

James, the first Black “Bachelor” in the history of the show’s franchise, revealed Monday night that he broke up with his pick to receive his final rose, Rachael Kirkconnell, after details of her racist past surfaced online. The controversy has been ongoing, forcing host Chris Harrison to temporarily step down from the show after defending Kirkconnell.

During Monday night’s finale, Bachelor Nation watched as James chose Kirkconnell over Michelle Young to receive his final rose. However, James didn’t propose as expected — instead, he asked Kirkconnell to continue their relationship, saying that he was not prepared to get engaged, following a frank conversation with his mother.

James told Kirkconnell he loved her, adding that he could see her as his wife and mother of his children.

Kirkconnell appeared eager to continue the relationship, despite not getting a proposal. The couple left the show together and James said that things were “great” immediately following filming.

But James announced during “After the Final Rose” that he broke up with Kirkconnell after her racist past came to light. The episode was prerecorded with host Emmanuel Acho filling in for Harrison earlier this month.

James told Acho that he initially dismissed the “heartbreaking” rumors, but then started to “question everything” when he found out they were true.

“As someone who grew up in the South, it takes me to a place that I often try not to think about,” James said.  “When she spoke out and publicly acknowledged that she would do better and she apologized, is when I was finally able to take a check on myself and see where I was at, and I wasn’t OK. It was in that moment and the conversation that I had that — Rachael might not understand what it means to be Black in America.”

“As Rachael acknowledged in her apology, there’s a lot of work that needs to be done,” he said, revealing the couple had broken up. “I have to take a step back and allow her to put in that work, and I’m looking forward to seeing her put in that work.”

“If you don’t understand that something like that is problematic in 2018, there’s a lot of me that you won’t understand. It’s as simple as that,” James added.

Acho said that some viewers have urged James to move on from Kirkconnell’s behavior, which included attending an Antebellum South-themed party in college and allegedly liking photos of Confederate flags and bullying a girl in high school for dating Black men. In response, James said, “You know what was a long time ago? Plantations.”

“I would ask those same people who are so triggered, to bring that same energy to supporting folks of color who are asking for change,” he said. He said it was unlikely the

“Those feelings don’t go away overnight. You can still really care about somebody and want them to do better,” he said. “I don’t think that anybody’s irredeemable. There’s a lot of processing that I have to do, and it’s just not a situation that I think that I would help. That’s why I stepped back and let her do the work that she’s committed to doing.”

Last month, Kirkconnell, the clear frontrunner of the season, apologized for her actions in an emotional Instagram video, telling fans not to defend her. She emphasized the importance of having uncomfortable conversations and putting in the work to “unlearn” racism, a sentiment she continues to echo.

She said Monday night that she was “living in ignorance” when she attended the party, adding, “in my eyes, there’s no excuse.”

After the finale, Kirkconnell posted a series of photos from the show to Instagram, writing that things did not turn out the way she had hoped.

“While I never expected this outcome, I respect his decision completely,” Kirkconnell wrote of James. “Of course I wish circumstances were different, but I still feel blessed for the time we did have together and the memories we made. I got to fall in love, and I truly believe he was the love of my life. He will always hold a piece of my heart. I’ll always be hopeful and believe what’s meant to be will be.”

She concluded by emphasizing the need to initiate change in the “small corners of your life.”

The new “Bachelorette” star was also announced during Monday’s finale — but next season brings a special surprise. The show revealed that both Katie Thurston, sent home earlier on in James’ season, and runner-up Young will lead back-to-back seasons of the show.

Harrison will not resume his hosting duties next season — instead replaced by former “Bachelorette” stars Tayshia Adams and Kaitlyn Bristowe.