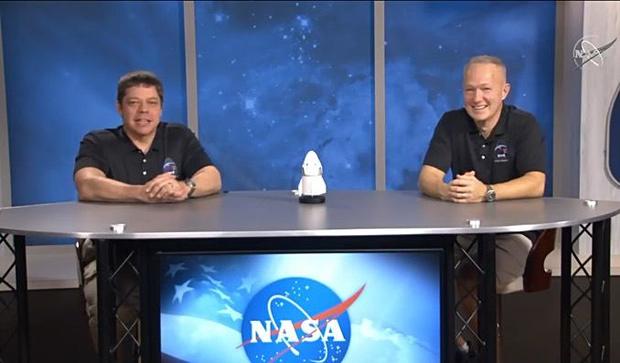 ▶ Watch Video: Astronauts describe trip home aboard SpaceX capsule and what they would do differently next time

Plunging back to Earth in a SpaceX Crew Dragon capsule Sunday amounted to a high-speed thrill ride, astronauts Douglas Hurley and Robert Behnken reported Tuesday. The fiery, flawlessly-controlled descent to splashdown went off without a hitch — a major step toward certifying the vehicle for operational flights.

The Crew Dragon splashed down south of Pensacola, Florida, amid dozens of boaters, some motoring close to the gently rocking capsule despite earlier Coast Guard warnings to stay clear. The spacecraft, with Hurley and Behnken still strapped in their seats, was hauled aboard a SpaceX recovery ship without incident.

It was the first water landing for astronauts or cosmonauts returning from orbit since the final Apollo capsule closed out a joint flight with a Russian Soyuz spacecraft 45 years ago.

Behnken and Hurley, veterans of two space shuttle flights each, said the ride down was possibly more exciting than either expected. Behnken provided a blow-by-blow description Tuesday during a virtual news conference at the Johnson Space Center.

“Once we descended a little bit into the atmosphere, Dragon really came alive. It started to fire thrusters and keep us pointed in the appropriate direction. The atmosphere starts to make noise. You can hear that rumble outside the vehicle,” he said.

“And as the vehicle tries to control (its orientation), you feel a little bit of that shimmy in your body, and our bodies were much better attuned to the environment (after two month in weightlessness) so we could feel those small rolls and pitches and yaws,” he added.

When the capsule’s stabilizing drogue parachutes deployed, followed by four large main chutes inflating, it felt “very much like getting hit in the back of the chair with a baseball bat,” Behnken said. “It was a pretty significant jolt.”

“If you’ve seen an old movie that happened to have some guys who’d been in a centrifuge, that’s what we felt like,” he said. “When the time came to splash down … we felt the splash and we saw it splash up over the windows. It was just a great relief.”

They did not say whether they felt any nausea before the gently bobbing spacecraft was recovered and pulled onto the recovery ship Go Navigator, something they mentioned before launch as a possibility.

Behnken and Hurley had nothing but praise for SpaceX and NASA’s Commercial Crew Program, thanking SpaceX for the extensive training they received and for audio recordings and video from an unpiloted Crew Dragon test flight last year that let them know what to expect during the trip back to Earth.

“When it performed as expected, and we could check off those events, we were really, really comfortable coming through the atmosphere, even though, you know, it felt like we were inside of an animal,” Behnken said.

Hurley and Behnken were launched atop a SpaceX Falcon 9 rocket on May 30. The spacecraft carried out an automated rendezvous to catch up with the International Space Station and, after the astronauts tested its manual control system, docked with the lab complex using the same forward port that once accommodated visiting space shuttles.

Over the next two months, Hurley and Behnken assisted Cassidy with a full slate of U.S. and partner agency research, logging 114 hours carrying out experiments that would not otherwise have gotten done with a single U.S. astronaut aboard.

Behnken also participated in four spacewalks with Cassidy to wrap up installation of replacement batteries in the station’s solar power system. Including six excursions during two previous shuttle missions, Behnken now ranks fourth on the list of most experienced spacewalkers, with 61 hours and 10 minutes spent outside the station.

Hurley, who piloted two shuttle missions, including the winged orbiter’s final flight to the space station in 2011, said he expected some surprises during the Crew Dragon’s reentry.

“I expected there to be some divergence and attitude control, because it’s a real tough problem for the ship as it gets into the thicker air to maintain perfect attitude and control,” he said. “And … the vehicle was rock solid.”

The Crew Dragon is the first American spacecraft to launch astronauts into orbit from U.S. soil since the space shuttle’s final flight in 2011. For the past nine years, NASA has relied on Russia’s Soyuz spacecraft to ferry U.S. and partner agency astronauts to and from the station, paying more than $80 million per seat under recent contracts.

SpaceX launched and recovered an unpiloted Crew Dragon capsule last year and carried out a dramatic in-flight abort, again unpiloted, earlier this year. That cleared the way for Hurley and Behnken to blast off on the program’s first piloted mission, a test flight known as Demo 2.

The spacecraft performed in near-flawless fashion throughout its first piloted mission and, if a detailed post-flight review confirms that, NASA managers hope to certify the spacecraft for operational crew rotation missions to and from the space station starting this fall.

“They do need to look at the data from our entry,” Behnken said. “They will do a very thorough review, both on the SpaceX side and the NASA side, to make sure that they’re comfortable. But from a crew perspective, I think that it’s definitely ready to go.”

That will be good news for Behnken’s wife, astronaut Megan McArthur. She’s one of four astronauts scheduled to blast off next year aboard the same Crew Dragon capsule that carried Behnken and Hurley back to Earth.

“My wife is assigned to a SpaceX mission, and we have a young son,” Behnken said. “So I’ll definitely be focused on making sure that her mission’s as successful as possible and supporting her just as she did for me over the last five years.”