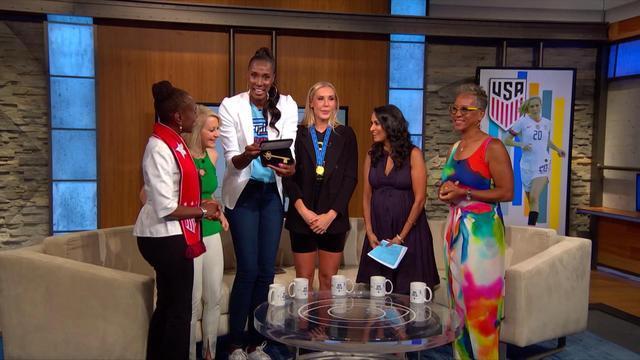 World Cup champion Allie Long asked New York City Mayor Bill de Blasio for a new key to the city after hers was stolen from her Los Angeles hotel room last week. Less than a week later, the first lady of New York City, Chirlane McCray, answered the soccer star’s call and surprised Long with a new set  during CBS Sports‘ “We Need to Talk”

Fresh off the U.S. Women’s National Team win against the Netherlands, Long returned to her hotel room after attending the ESPY Awards with the other players to find it had been burglarized. The thief stole her wedding ring, cash and the symbolic key de Blasio presented to the players during the ticker-tape parade down the “Canyon of Heroes” earlier that day.

The Los Angeles Police Department responded to a burglary call from the Ritz Carlton hotel on Thursday around 2:30 p.m., a spokesperson told CBS News. The investigation revealed that on Wednesday around 9 p.m., Long and her husband “left the door to their hotel room slightly ajar.” They both returned to the room around 10 p.m., and the following morning discovered that several of Long’s belongings were missing. The investigation is ongoing.

“After the @ESPYS show someone stole my wedding ring, cash and the key to my favorite city after just receiving it from my hotel room,” the New York native tweeted Thursday night. “Do you make copies @NYCMayor ? I would love a new one.”

De Blasio responded to Long Friday morning on Twitter. “So sorry to hear it, Allie,” he tweeted. “Hang in there. Don’t worry about the key. Like any good New Yorker, we keep a spare for our neighbors! We got you covered.”

The 2020 presidential candidate and his wife honored their word. Long was appearing as a guest during a special edition edition of CBS Sports‘ first-ever nationally televised all-female sports talk show “We Need to Talk” on Tuesday when McCray surprised the athlete with a brand new key.

“Well, we love you. New York City is still celebrating your victory,” said McCray after Long thanked her. “It was such an honor to host you and the team last week. And, you know, we’re watching you and cheering you on. And, as the mayor said, ‘We always have a copy.'”

Long thanked de Blasio too, saying “thank you. I appreciate this. Mayor, you the man”