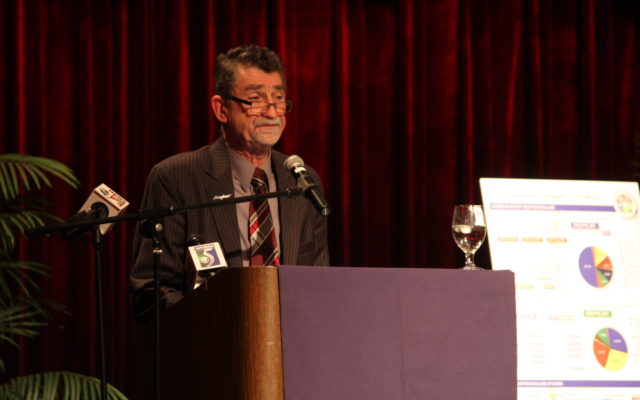 From Reinventing Saginaw to This is Saginaw: We Build, the city now looks to the next decade after several years of hard work pulling itself out of economic hardship.

In a State of the City address Thursday, February 6 at the Dow Event Center, Saginaw Mayor Floyd Kloc told the crowd about the city’s new aggressive marketing campaign to let the world know the city is a place where people will want to live, work and play. He outlined eight key areas of the campaign, including We Build Opportunity, Culture, Community, Good Health and more. Each area highlighted ways the city has improved and continues to do so, including a further reduced crime rate, hundreds of millions of dollars in investments and the dozens of events and entertainment venues around the city.

Over the past several years, major crime in the city has continued to decline. In 2019, top tier crimes dropped 15 percent from the previous year, with a 40 percent reduction in homicides and a 25 percent drop in shootings.

Kloc says the image of Saginaw as a crime ridden city is simply false, crediting partnerships between law enforcement agencies, neighborhood associations, blight reduction and other factors as contributing to the decline.

Kloc says the image of the city as “Sagnasty” is long overdue to go away.

“We are not that city from five or seven years ago. The positive things that are happening, the developments that are happening, the arts, the culture, the entertainment… Saginaw is probably one of the most concentrated groupings of arts and cultural institutions in any community, particularly of our size. It’s an amazing community and we just got to get people to understand that, to participate in it. If they participate, they’ll know there’s a lot of good things.”

With economic development, the city has attracted more than $228 million over the past few years, creating 840 jobs in over 70 projects. Most recently, these have included the SVRC Marketplace, the Central Michigan University College of Medicine and the Delta College Saginaw Center. In 2019, Saginaw was certified by the Michigan Economic Development Corporation as a Redevelopment Ready Community in order to make it more attractive to businesses looking for a place to set up shop.

While all these positives are happening, Kloc says there are still challenges to overcome. He cites a lack of revenue sharing from the state and a unique tax cap as hindering the city from providing services city residents want.

Kloc also stressed the importance of the 2020 Census. Taken every ten years, the Census gives a count of the population of the United States, with each community taking part. It determines the number of Congressional and state legislature districts for each state, as well as federal funding based on population size.

Kloc says the money is significant.

“Every person not counted is about $1,800 lost to the city. 56 people, that’s not that many people, that’s $1 million lost to the city… This count is for the next ten years. That’s what people don’t realize, it isn’t for one year. If we lose $1 million for 56 people not counted this year, it’ll be the same thing for the next ten years, $10 million.”

Kloc says the city is working with citizen’s groups to ensure as accurate a count as possible.

Overall, Kloc encourages people to come to the city to see what it has to offer. He hopes the epithet Sagnasty gives way to a new moniker – Saginawesome.