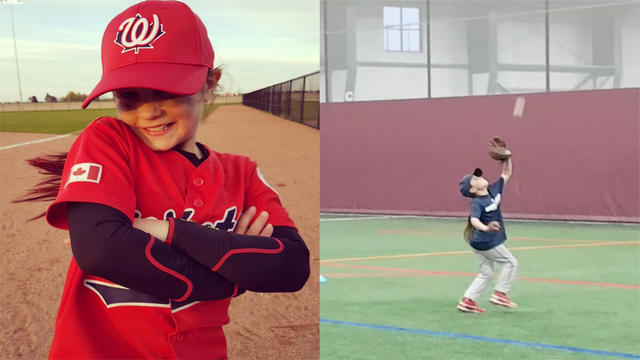 Eight-year-old Ashlynn Jolicoeur plays baseball like a girl — meaning she’s amazing at it. Jolicoeur, who is from Toronto, has been playing the sport since she was barely old enough to walk. Her parents have home videos of her trying to swing a bat as a 1-year-old. She recently hit a career milestone: she was named MVP of her team.

However, after receiving the honor, a parent of one her teammates said “girls should not be playing baseball and they should stick to softball,” Jolicoeur’s dad, Dan Therien, told CBS News.

“I told her that Ashlynn is a baseball player and we don’t put limits on our kids or their dreams,” he said. But during next season’s tryouts for the team, Ashlynn was cut.

Jolicoeur didn’t let this discourage her. She knew she was just as good as the boys — if not better. And she found a way to show the world.

Jolicoeur’s parents started an Instagram account for her a few months ago, showing off her baseball skills. Jolicoeur’s mom posted a video of the girl catching pop flies, and it got widespread attention.

Jolicoeur also sent some videos to Baseball For All, an organization that promotes and provides opportunities for girls to play baseball. They were of course impressed by Jolicoeur, and invited her to come to Rockford, Illinois, for their National Girls Baseball Tournament.

She’s attending the tournament this week, where she’ll be surrounded by people who believe in girls playing baseball.

Back home in Canada, she was able to join another baseball team, and said she’s fortunate to have a coach that supports her 100 percent. “She is working hard every day and always has a list of goals she is working on,” her dad said.

The family hopes her story inspires people to focus on their goals — and not back down because someone tells you that you can’t.

“Do not be discouraged if you don’t make a specific team. None of that matters if you keep practicing and continue to get better. Use your current situation and just keep working hard,” Therien said.