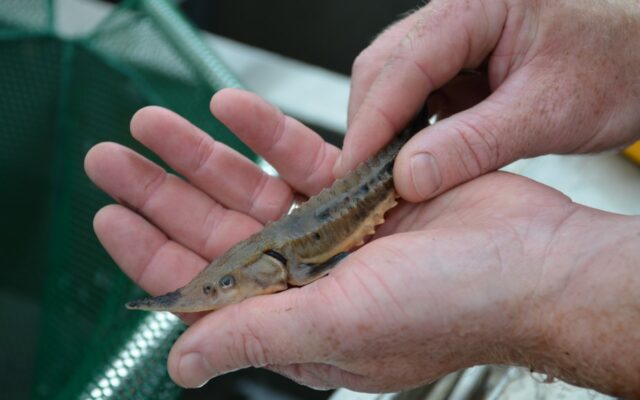 Bay City, MI – A new project using a sophisticated system of receivers across Saginaw Bay and Lake Huron will help guide researchers in their efforts to return state-threatened lake sturgeon to the Saginaw Bay system.

Sturgeon will be implanted with transmitters before they are released into four rivers – Cass, Flint, Shiawassee, and Tittabawassee – so that researchers can track them as they pass receivers located in the river systems and Saginaw Bay. Little is known currently about where stocked sturgeon spend their time, and this new information will help guide the future of the multi-year restoration program. Partners in the effort recently announced that 4,000 sturgeon have been released into the system since 2017. Beginning in 2022, 160 sturgeon will be implanted with transmitters and they will be monitored with a new array of 45 receivers in the Bay and river system.

“We are excited to be a part of the project”, said Michael Kelly of The Conservation Fund and the Saginaw Bay Watershed Initiative Network (WIN). “We’ve been working closely with partners to facilitate the stocking of these fish, and now we are looking forward to learning more about their movement in the system. Sturgeon typically do not return to the rivers to spawn until they are at least 15 years old, so this is going to give us some early insight into their movement”, continued Kelly.

The Saginaw Bay project is part of a larger effort across the Great Lakes facilitated by the Great Lakes Acoustic Telemetry Observation System (GLATOS). “ GLATOS aims to provide fishery managers with information related to the behavior and movement of fish in the Great Lakes that helps support efforts to sustain native stocks and control invasive species”, said Chris Vandergoot, Associate Professor at Michigan State University and Director of GLATOS.

The project is largely funded by the Great Lakes Fisheries Trust, GLATOS and the Saginaw Bay WIN program, with additional partners including the Michigan Department of Natural Resources, the U.S. Fish and Wildlife Service and U.S. Geological Survey.

While the acoustic receivers in Saginaw Bay are primarily in place for sturgeon monitoring, the acoustic array across the Bay will also be used to track walleye movement beginning in 2022. Researchers will be working with charter fishing captains and recreational anglers to tag and release 300 walleye out in the open water of Saginaw Bay next spring, with acoustic monitors placed at the entrances to several major spawning rivers. “The implications are obvious. Relative river usage will tell us what locations are most used and that can help us prioritize habitat improvement like reef building and fish passage at dams. Where all this natural reproduction is coming from remains one of the last great mysteries surrounding Saginaw Bay Walleyes” said David Fielder, Ph.D. Fisheries Research Biologist with the Michigan Department of Natural Resources.